My reading habits around MSDN magazine changed recently and now I am back to getting the print version of the magazine – I have a complaint about the cover. For the past couple of years I have been trying to exclusively read MSDN magazine online and so I let the print subscription expire. Well that was just not working for me since I rarely read an MSDN article in one sitting. So I turned my print subscription on and I have a small bone to pick. But first a little more back-story.

As the number of products and technologies available to build applications has grown I have found that I can no longer be an expert in everything. Rather I have had to focus my depth on a few technologies and be at the 100/200 level on the remaining ones. You might be scratching your head going “then why is the depth of MSDN magazine a problem?” Simply because the intersection of what I am going deep on and articles in MSDN is smaller [which, by the way, is exactly what it feels like the editors are striving for and is a good thing]. So my typical MSDN experience is reading 1, maybe 2 articles in depth and skimming the rest.

Well that is not exactly my typical MSDN experience; which brings me to why I feel like venting a little today. In actuality, the first thing I do when I get any magazine is to rip out all the marking stuff. You know the stuff I am talking about all those things from vendors and subscription blow-ins. I hate them because I can’t flip through the pages without stopping on one of these. They are like bookmarks someone else put in a book – they are never what I am looking for. Only after removing all these obstructions do I feel that I can actually absorb the content. 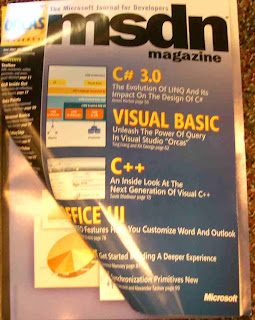 Well, this is the second month I have noticed a new cover style for MSDN – the cover that folds back over the outside. It has been my experience that on most magazine covers when the fold-out that the fold out actually tucks into the magazine. Given my routine of cleaning up my magazines before I read them I would open the front cover, flip open the fold-out and see if it was anything interesting. Why a fold-out? Sometimes I have been rewarded with some nice panoramic nature scene and I don’t mind so much. But I digress…regardless my next step is to rip off the fold-out part.

Here is the problem; once I open the darn thing now the cover becomes an absolute annoyance. It keeps getting caught on things. Torn. Battered and otherwise abused. Which leaves me no other solution then to rip off the fold-out (and be left with this faceless magazine) or to just toss the magazine [hey I used to be the kind of guy who would buy a new car when the windshield wipers needed to be changed].

This leads me to one of two conclusions; either the folks at Microsoft have been spying on me in my favorite reading location (very gross). Or I am not the only one that has this cleanup ritual (almost as scary).

Or it could be I just needed something to write about. I don’t have much time before my next meeting so this is best I could do on short notice. Don’t worry I am not loosing any sleep over this one.