I am having one of those ornery moments and I am taking it out on Outlook. It locked my machine up hard today and I don’t know why; which really burns my toast.

I was just scanning through the boatload of emails in Outlook 2007 and noticed an orange status bar continuously scanning on the To-Do Bar. Here is what starts running through my mind…

“I appreciate you showing me that something is happening; but can you throw me a bone…What the

So I set out to try and figure out what Outlook was doing; the way a non-developer may… 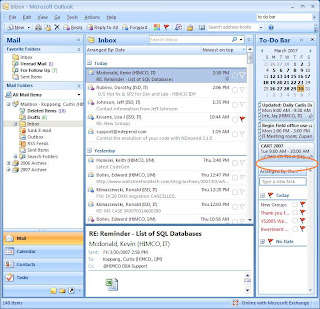 So what else can I do but to just rant on my blog about it. Wouldn’t you know it; I soon as I went to grab a screen shot – it stopped. So I took the screen shot anyway and circled the place where this happening. On the off chance that someone actually reads this AND they know what the heck that bar means; please let me know.

I think Microsoft has done a better job at reducing the number of pauses that happen in the software; where things just stop and have you wait for some “background” process to complete. It is my opinion (and we all know how many of these there are and what they’re worth) that it would be better to just tell the user what is going on; it’s the not knowing that makes it hard.

For instance, when I delete a file in Windows why does it take so long? What would be nice is if Windows told me in the status box…

“Please wait while I put this file in the recycle bin for you”
“Oh, this is taking longer than I expected because someone else is hogging up the disk channel”

[Note: Of course I hope that for the sake of my Mom that they would clean up the message a little; I can just imagine trying to explain that message to her (unlike Don Box’s mom, my Mom does not know assembler).] Now that I know why I have to wait maybe there is something I can do about it – “Oh yeah, I started that Disk Cleanup utility a couple of minutes ago, maybe I should pause it”. Users will start to draw correlations between things and just become smarter.

Conceptually what I am describing sound nice; but as a software guy this pretty challenging. It seems like it requires design/architecture that supports the exchange of this type of information. Of course security would have to be honored. Not to mention that you may end up telling people more about the internals of what you are doing (or not doing) than you would like to. This would make a good thing to report on when capturing data around user experience, which Microsoft (and others) seem to be doing more of.

Sometimes I wish I was working on something this cool.

Just a thought it would be prudent to give credit for the name of my blog; this phrase was uttered by my good friend Bernie Odoy.

We were feeling pretty punchy one day and were just amazed that how sometimes what we say does not seem to have any impact on those it was said to. Does this happen to anyone else or is it just us? So in a moment of extreme sarcasm Bernie uttered this quote – Sometimes words mean something. I realized its brilliance immediately and wrote it down on a post-it and stuck it to my monitor. That was two employers and 4 years ago.

Here are some of my other favorite quotes on my board of fame. No one famous; just a bunch of people I have worked with over the years and maybe one or two of my own (I have no idea where this is going).

“If you say something and no one hears you. Did you really say anything?” This too was uttered by Bernie. I am not sure that it was said on the same day as the previous quote, but certainly has the same sentiment.

“It’s either Wrox or it’s Box”. This is a quote by yours truly. I used to teach a lot of classes and this one was uttered in response to a question an attendee asked me. They asked me what the difference is between the two books – a book published by Wrox (a technical publisher) or another book (I don’t remember the titles and that’s probably a good thing to protect the guilty). At the time I was not a big fan of books published by Wrox; nothing personal, but they just seemed to be a book factory and the quality suffered because of that. So I was comparing a book published by Wrox to a book written by someone else who was all about quality – Don Box. Don is this really cool down to earth dude who also happens to be really smart and articulate – leathal combination. Don had a way of presenting information with layers; so no matter your “level” you would walk away with something. That takes skill and time; two things that you don’t get when you are rushing a book to market. So I was trying to say that either you get something quick or you get quality. Hmmm, I seem to recall telling some project managers I have worked with in the past the same thing…

“…It’s still a collection; it’s just that it’s a collection of one”. My good friend Greg Manto gets credit for this one. At the time we were working at Microsoft (as consultants) and Greg, Bernie and I were all on the same engagement together. We were building this object model for our client written entirely in VB4. Yikes! We were in a design meeting discussing how to implment this one class and Greg uttered this quote. He did not mean to imply that everything is a collection, but rather that just because you only have one does not mean that it is NOT a collection. He went on to say that if there is a good chance that there will be more than one in the future make it a collection today; so that the object model does not need to be changed to accomodate this in the future. You can use defaults and shortcut properties to make getting to the most common element in a collection easy. It is something that has stuck with me ever since and I get a chuckle every time pull it out of the archives.

I realize these are never going to make to the quote hall of fame; but they were uttered by some code warriors in the heat of battle. In my book, that makes them pretty good.

By the way, I still have the original post-it.

After a long hiatus from blogging I have decided to get back online. I feel like there is plenty to comment on regardless of whether anyone is listening or not.

On a professional note; I just had to cancel a vacation in order to debug a performance problem at work. It is one of those particularly gnarley problems that does not occur regularly. It is always interesting to get back into the mindset of solving performance problems. They require an extreme amount of rigor and analysis. It’s a different mindset than pure development.

I find then when developing I will often change several things at once and then re-run my code testing each of my changes. Typically the changes I make are independent of one another; that is I don’t try and fix the same thing more than one way. It reminds me of a couple of core tenets of debugging these types of problems…

1. Jim McCarthy (formally of the VC++ team) has a principle from his book that states – get to known state and stay there. This is paramount to trying to solve these types of issues. You can’t introduce change into something that is not stable.

2. Change one variable at a time. Measure. Correlate. Confirm. Consider changing another variable. We had someone change two things in the environment and the problem disappeared. It’s bad enough it happens sporadically, but now we cannot attribute the disappearance to any one thing.

3. Get to a simple reproducible case as soon as possible. In our case it takes us three hours to recreate the problem – IF (big if) it’s going to happen again. That means we only get 2-3 attempts per working day. We are pretty close to getting that down to an 18 minute case; which means we spend much more time working (not waiting).

Time to get back to running tests rather than writing about them.